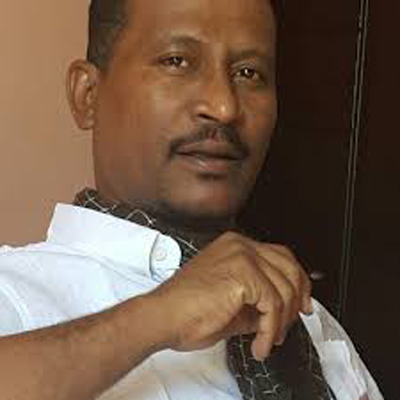 The National Umma Party did it with Abd al-Rahman al-Sadiq al-Mahdi when he participated in the government (humiliation and hunger) as an assistant to the president and the National Umma Party disavowed him, and he confirmed that his participation in the rescue authority is a decision that belongs to him alone, even if it (the rescue) falls. Abd al-Rahman al-Sadiq al-Mahdi for his participation in the government of al-Bashir, and that (the apology) passed to the people, promoted and spread it, and then claimed acceptance of the apology.

For Sadiq al-Mahdi, in his dialogue with Ziauddin Bilal, on the authority of the former finance minister, he said: (He is a party of the ummah and is a committed member, but we have not nominated him) ... How does he remain (committed) and participate despite his party's refusal to participate? And Imam said of the party's leader, Muhammad Fall, who worked in the office of Ibrahim Al-Badawi: (Muhammad is a Sudanese cadre, and he worked with Al-Badawi .. He did not work under the authority of the party, and the matter was done personally, without any quotas or party selection). Six (6) governors from the National Umma Party participate out of a total of (18) governor appointed by Abdullah Hamdouk in (18) states - meaning that the National Umma Party’s share of positions (governors) reaches a third - yet the National Umma Party claimed to withdraw them from their posts and affirmed They refused to participate,

Al-Sadiq al-Mahdi said in his dialogue with Ziauddin Bilal: (If they accept continuing, they represent themselves) ... and the Imam does not lie but does not bear responsibility, and he says: (We affirmed that we did not participate in the Sovereignty Council and the Council of Ministers, and those who participated from our party participated despite our nose, and we said that The party builds itself in preparation for the elections.)

Nothing remains of the Imam because of these many and many participations of party members in the government. Is there more political (slag) than this slaughter that the National Umma Party exercises on people in Sudan? With this Hamdok won 6 / zero in the (political) game that is played between the two parties

The National Umma Party does not want to take any responsibility even though its cadres participate in all councils, bodies, sectors and committees of the transitional government .. It wants to promote itself and present its (advertising) offers for the upcoming elections through these roles that it performs and during which it claims not to participate in the transitional government. · Before that, the (Ummah) had claimed to freeze its membership in (Qhat) .. The Mahdi said about that, justifying their presence, activity and mobility with freedom and change: (We are still frozen our membership in the Alliance of Freedom and Change Forces, and what is currently being coordinated in certain situations). It is just (coordination) .. Coordination, Imam, no more than that !!

After Hamdok announced the names of the governors who had been chosen and before taking the constitutional oath, I was asking myself whether Hamdduk and his government would stand up to the protests and protests that came out in some states to reject some of the governors? He started those objections and revolution to the decisions of Hamdock of the National Umma Party when he demanded the withdrawal of his staff, and he went further when the Darfur Bar Association described the speech of a deputy of the leader of the National Umma Party that (Duma) represents one of the components of the local conflict in West Darfur by saying (that his speech is like Pour oil over the fire, and help ignite the clues of tribal strife through the wrong message).

In Shendi and some of the Kizan centers in other regions, there were protests that amounted to the threat of death, sit-in and street closures, in refusal to install a (woman) in the position of governor of the state.

The strange thing is that Shendi and its environs have been (30) years old, exercising patience and contentment with all the Rescue Government’s decisions, and dancing with Al-Bashir to the tunes of the “fire and raging” .. We did not see protests or demonstrations from them except in the government of Hamdok.

Also (press releases) came out from some legal entities condemning some of the governors and their choices, with a storm of media criticism at the official level and at the level of communication sites. But all of these things did not make Hamdock retract his choices, and not one (governor) withdrew from the college (18) governor. This affirms the steadfastness of the decisions of the Hamdok government and its ability to face the protests and (tires) that were burned in the main streets in some states, and the (gears) that were installed to close in rejecting Hamdok's choices and threatening him. Hamdouk was before a real test not in the choices of governors, but in insisting on those who were chosen and adhering to them.

If you want to avoid the evils of Sadiq al-Mahdi and his objections to the government of Hamdok, either make him (prime minister) in the transitional government (replace Hamdouk), or enact him a position (prime minister) in (Qaht). · All the governments that came after the revolutions in Sudan in which the Imam reserved a seat (Prime Minister) .. He is Prime Minister, you are an opponent of the Prime Minister .. The evidence for this is that the Imam has been praising the Council of (sovereignty) in all his dialogues and statements and criticizing the Council of Ministers. Attention